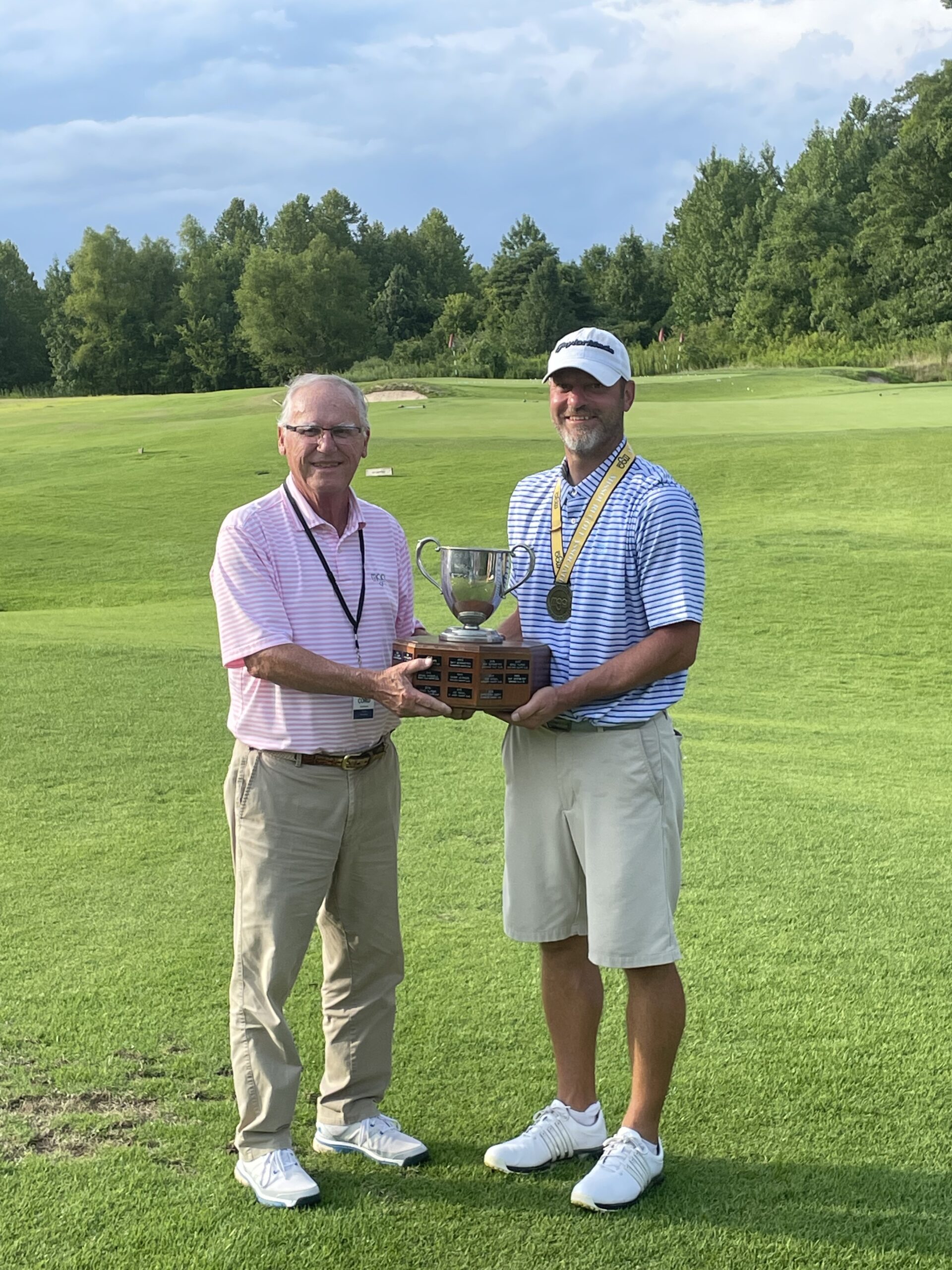 Nurski, a now three-time Stroke Play Champion, shot 10 under par, 278 (70, 69, 70, 69) over the four-round tournament. Nurski has won several MGA events over the years, including the Missouri Amateur three times, the Four Ball Championship three times, and the Mid-Amateur Championship twice.

After finishing the second round tied for the lead with Oral Roberts collegiate golfer Presten Richardson, Nurski shot two under par, 70, in today’s morning round to remain tied for first with Richardson. The two shuffled between first and second throughout most of the final round of 18. It was not until hole 15 that Nurski took the lead with a birdie and carried the lead through the last hole.

Richardson placed second shooting seven under par, 281 (71, 69, 69, 72) over the four rounds. After shooting one under par during the first round, Richardson found himself nearing the top of the leaderboard after shooting three under par in round two.

Congratulations to your 2022 Missouri Golf Association Stroke Play Champion, Brad Nurski. Thank you to all participants for another great event.

For final results from the Stroke Play Championship, visit: www.golfgenius.com/pages/3370268

Nurski played another impressive round today, making four birdies. Richardson also had a dominant second round, getting through 17 holes with five birdies. He struggled a bit on hole 18 and double bogeyed, carding the three under par score. Nurski and Richardson will begin the final two-round day of competition in first and second place, respectively.

Louisiana Golf’s Hudson Dubinski (Columbia) and three-time champion Skip Berkmeyer (Town and Country) both sit at three under par, 141. Dubinski climbed the leaderboard during round two. After shooting an even par, 72, during round one, he shot an impressive three under par, 69, to claim his rightful third place spot. Berkmeyer started and ended his round with birdies on holes one and 18. He finished round two at one under par, 70.

The field at large performed similarly during Tuesday’s round with 16 players shooting below par compared to just 13 the day prior.

After the second round, the cut was made for the top 50 players and ties. The cut sits at +9.

The final two rounds of stroke play will take place tomorrow morning and afternoon, with the award ceremony following the fourth round.

For final results from day two and to view tee times for tomorrow, visit: https://www.golfgenius.com/pages/3370268

CAPE GIRARDEAU — After the first round of competition at Dalhousie Golf Club, 13 players sit in red figures in the 25th Missouri Stroke Play Championship.

Sullivan shot three birdies and three bogeys, but it was his eagle on 18 that sent him to the top of today’s leaderboard. Minor started off his round with a birdie. He then shot three more to finish at -2. Nurski dominated the back nine; he started the back with a birdie on 10, followed by birdies on 14 and 17. Berkmeyer shot five birdies during the first round. Starting on the back nine, he went into the turn at -2 and coasted through the front nine. Giebler, who is playing at his home course, started off his round with three bogeys. He bounced back right after with five birdies to finish in the red.

Of the 125 golfers competing, 13 shot in the red today, and five sit at an even par.

After tomorrow’s second round of stroke play, the top 50 players and ties will make the cut and advance to round three.

Round two of the Stroke Play Championship will begin tomorrow with golfers teeing off in the a.m. and p.m. on holes one and 10.

For final results from day one and view tee times for tomorrow, visit www.golfgenius.com/pages/3370268