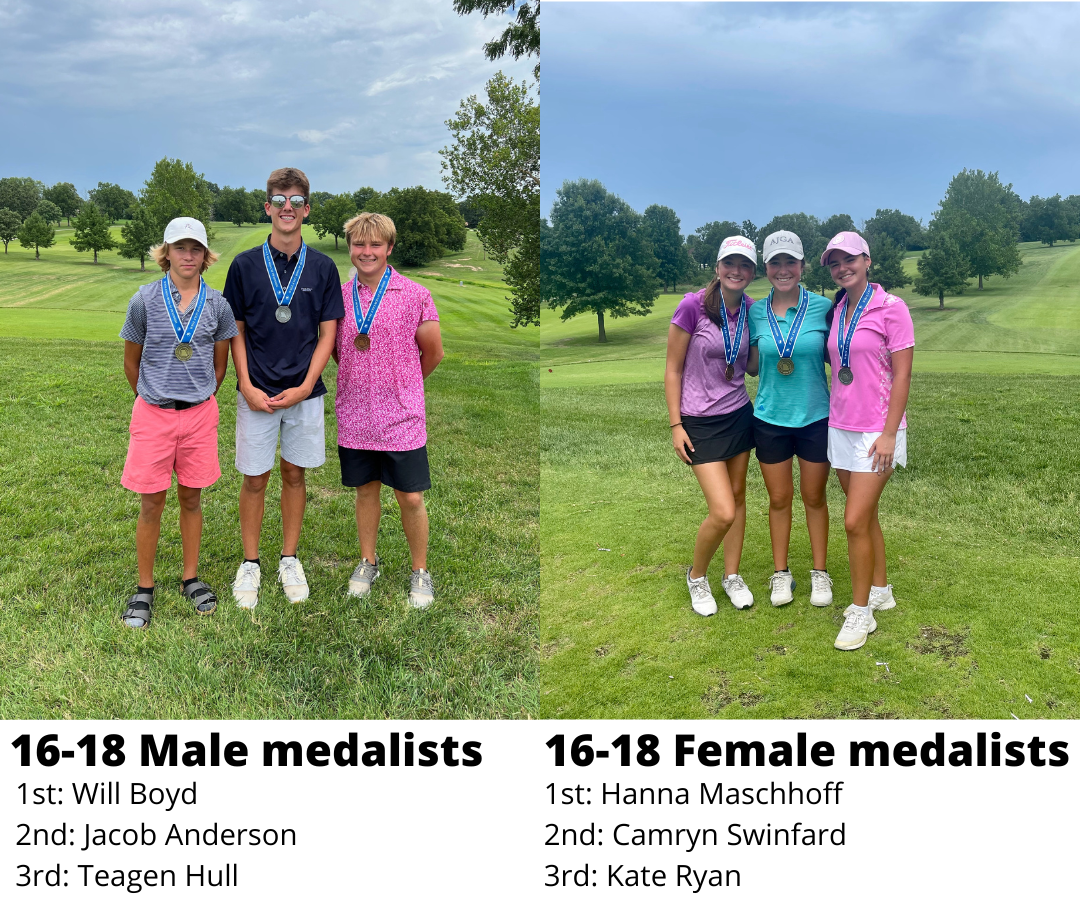 ELDON, Mo. — The final round of the Missouri Junior Tour Championship took place today at the Eldon Golf Club in Eldon, Mo. Junior golfers have competed in MJT events throughout the summer leading up to the championship.

Winning the 16-18 Male Flight after shooting seven over par for a total gross of 151 is William Boyd (California). Jacob Anderson (Ashland) shot 12 over par, 156 during the two rounds to take home second place. Playing on his home course, Teagen Hull placed third, carding 16 over par, 160.

Hanna Maschhoff of Eldon Golf Club won the 16-18 Female flight with a total gross score of 156, 12 over par. There was a second place tie at +18 between Kate Ryan (Columbia) and Camryn Swinfard (Jefferson City). Camryn won the chip off to bring home second; Kate took third.

Both Dawson Schnieders (Jefferson City) and Talon Hull of the Eldon Golf Club shot 21 over par, 165 during the two round championship. After a one hole playoff, Schnieders birdied the first hole and took home first, and T. Hull took second. Zach Hull shot a total of 22 over par, 166, to place third on his home course.

Avery Wells shot 19 over par for 163 during the two rounds on her home course to win the 14-15 Female flight. Coming in second place is Mia McGraw (Jefferson City), who shot a total gross of 188. There was a tie for third between Madison Wolf (Saint Peters) and Autumn Allen of the Eldon Golf Club at 194. Allen won the chip off and placed third.

Eli Hutchison (Mokane) shot three over par, 75, during the two rounds to win the 12-13 Male flight. Two strokes behind him, playing at his home course is Jackson Bennett, +5, 77. And just three strokes behind first place,tied for third at six over par, are Ty Brandt (Jefferson City) and Kaden Assie (Ashland). Brandt won the chip off, taking home third place.

Winning the 10-13 Female flight on her home course, with a total gross score of 88, 16 over par, is Haven Evers. Coming in second is Aliyah Simmons (Columbia) at 29 over par, 101; McKenzie Martin (Jefferson City) was just two strokes behind at 31 over par, 103, to bring home third place.

Playing on his home course and winning the 10-11 Male flight is Graham Henley. He shot five over par, 77, during the two rounds to win the flight by 7 shots. Coming in second at 12 over par, 84, is Blaine Munzlinger (Columbia). Oliver Meyeroff (Rolla) and AJ Warren (Chillicothe) placed tied for third at +15. Warren won the chip off and placed third.

Placing first in the 8-9 Male flight by eight strokes is Hunter Brown (Washington). He shot five over par, 75, during the tournament to win the flight. Tyson Strupp (Columbia) placed second with a total gross of 83, 13 over par. Coming in third is Finn Hutchison (Mokane) at 17 over par, for a total gross of 87 from the two rounds.

Listed below are the Missouri Junior Tour Players of the Year:

Congratulations to all of the flight winners, medalists, and our MJT Players of the Year. A big thank you to all of the junior golfers who participated in any MJT events throughout the summer — we look forward to seeing you all again next year!

You can view full results at this link: www.golfgenius.com/pages/3406010

ELDON, Mo — The first day of the Missouri Junior Tour Championship has been completed at the Eldon Golf Club in Eldon, Mo. 62 junior golfers set out to play in the final MJT event of the 2022 season.

After the first round of stroke play, the nine flights have leaders going into the second and final round of the championship.

Leading the 16-18 Male flight is Luke Barchenski (Eldon) at five over par, 77. Right behind Barchenski is William Boyd (California) who sits at six over par, 78, and three strokes behind the leader, at eight over par, 80, is Jacob Anderson (Ashland).

Hanna Maschhoff (Lake Ozark) carded two over par, 74, to sit at the top of the 16-18 Female flight leaderboard going into round two. She has a solid lead over Camryn Swinfard (Jefferson City) who sits in second at eight over par, 78, and Kate Ryan (Columbia) at 13 over par, in third.

Competition was tight in the 14-15 Male flight. Dawson Schnieders (Jefferson City) carded seven over par, 79, to go into round two leading his flight. Zach Hull (Eldon) is only one shot behind him, at eight over par, 80, and Talon Hull (Eldon) sits at 10 over par, 82.

Avery Wells (Eldon) shot six over par, 78, to lead the 14-15 Female flight by 12 strokes going into the final round of the championship. Madison Wolf (Saint Peters) sits at 18 over par, 90, for second and Mia McGraw (Jefferson City) is in third at 23 over par, 95.

Leading the 12-13 Male is Cooper Toalson (Eldon). He shot five over par, 77. Right behind Toalson is Eli Cummings who carded six over par, 78, during round one. Lake Bennett (Linn) is in third place going into the final round at nine over par, 81.

Haven Evers shot eight over par, 44, during the first round of the MJT Championship to lead the 10-13 Female flight. Shooting 12 over par, 48, is Aliyah Simmons (Columbia). McKenzie Martin (Jefferson City) shot 17 over par, 53, for third place going into the final round.

The race for first place In the 12-13 Male flight is a close one! We have a tie for first between Ty Brandt (Jefferson City) and Jaden Massie (Ashland). Both juniors shot three over par, 39, during the first round. There is also a tie for third place between Jackson Bennett (Eldon) and Eli Hutchison (Mokane) who both carded four over par, 40.

Blaine Munzlinger (Columbia) is leading the 10-11 Male flight at five over par, 41. He is closely followed by Graham Henley (Eldon) who is just one shot shy of him at six over par, 42. Tied for third going into the final round at seven over par are Jagger Glaze (Eldon) and AJ Warren (Chillicothe).

Hunter Brown (Washington) leads the pack in the 8-9 Male flight at one over par, 36. In second is Tyson Strupp (Columbia), shooting four over par, 39. Finn Hutchison (Mokane) is in third place heading into the second round. He shot six over par, 41 during round one.