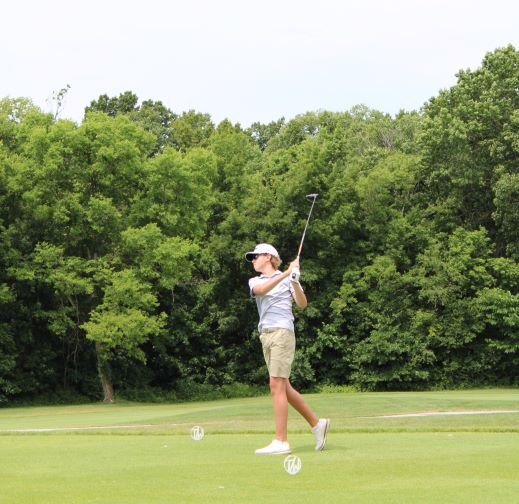 FULTON, Mo. – The Missouri Junior Tour continued today with an event held at Tanglewood Golf Course in Fulton. Divided by age into flights, 88 junior golfers took to the course for a round of stroke play.

Hanna Maschhoff (Lake Ozark) was the winner of the 16-18 Female flight after shooting 1 over, 73. Sophie Hinds (Jefferson City) and Camryn Swinfard (Jefferson City) tied for second at 7 over, 79. Hinds won the chip-off and took second place, with Swinfard coming in third.

Chayton Jordan (Rolla) and Graham Hoffman (Columbia) tied for first in the 14-15 Male flight with a score of 3 over, 75. After the chip-off, Jordan was awarded first place and Hoffman took home second. Kyle Locke (Hannibal) took home third place with a score of 5 over, 77.

Eli Hutchison (Mokane) won the 12-13 Male 9 hole flight at 4 over par, 40. Jackson Bennett (Eldon) and Seth Duncan (Osage Beach) tied for second place after both shooting 5 over, 41. Bennett won the chip off and took home second place, with Duncan finishing in third.

Haven Evers (Eldon) is the winner of the 10-13 Female flight. She shot 47, 11 over par. Aliyah Simmons (Columbia) and Drew Maze (Columbia) tied for second place at 18 over, 54. Maze won the chip-off and was awarded second place, and Simmons took home third.

Blaine Munzlinger (Columbia) came out on top of the 10-11 Male flight after shooting 4 over, 40. Jack Sinnett (Jefferson City) came in second at 8 over, 44, and Jagger Glaze (Eldon) took home third place at 9 over, 45.

Hunter Brown (Washington) was the winner of the 8-9 Male division with a score of 2 over, 38. This is Brown’s fourth 1st place finish in MJT events this season. Second place goes to Finn Hutchison (Mokane) after shooting 10 over, 46. Finally, Calvin Sears (Columbia) took home third place with a score of 15 over, 51.

The next Missouri Junior Tour event will be held at Lake Valley Golf Club in Camdenton on July 11. For more information on upcoming MJT events or other MGA tournaments, visit www.mogolf.org