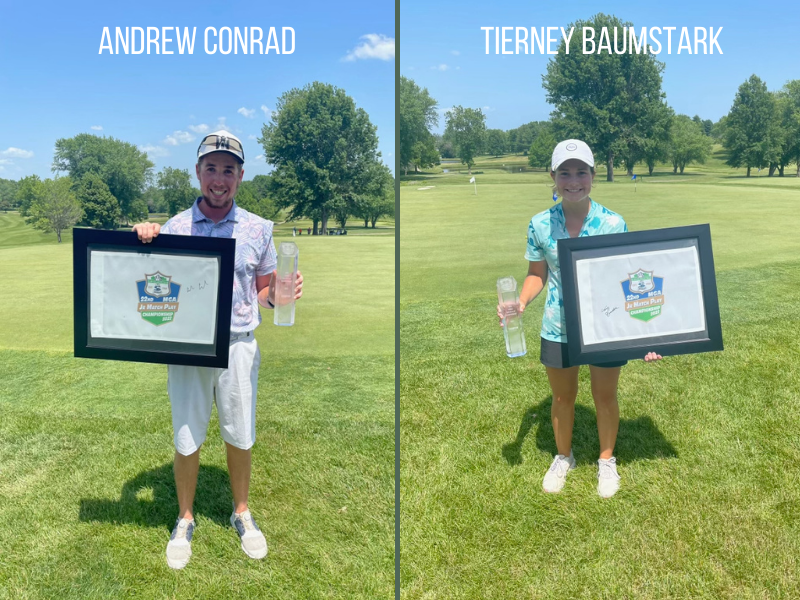 RICHMOND, Mo. (June 16, 2022) – After four days of play, Andrew Conrad (Smithville) and Tierney Baumstark (Columbia) have been named the male and female division champions of the 2022 Junior Match Play Championship at Shirkey Golf Club in Richmond!

Conrad and Baumstark completed two rounds of stroke play and three rounds of match play before reaching the final match play round. They both won their flights during the stroke play portion of the tournament.

After defeating Gaige Lewis (Springfield) in a close semifinal round this morning with a score of 1-up, Conrad moved on to the final round and competed against Alexander Wiseman (Poplar Bluff) who won his semifinal matchup against Jonathan Jordan (Rolla). Conrad won the round with a score of 3 & 2.

Tierney Baumstark started off the morning against Page Bowman (Springfield), where she won with a score of 4 & 2. She then faced Marlee Edgeman (Marshfield), who beat Kiser Pannier (Sedalia) in the semifinal round. Baumstark and Edgeman had a close round, with Baumstark ultimately pulling out a win at 2 & 1.

Congratulations to Conrad and Baumstark, and to all of the competitors for a great Junior Match Play!

To view a full list of results, visit this link: www.golfgenius.com/pages/3377373

For more information about future Junior events, visit www.mogolf.org/tournaments/jr-golf-tournaments/ or call the MGA office at (573) 636-8994.