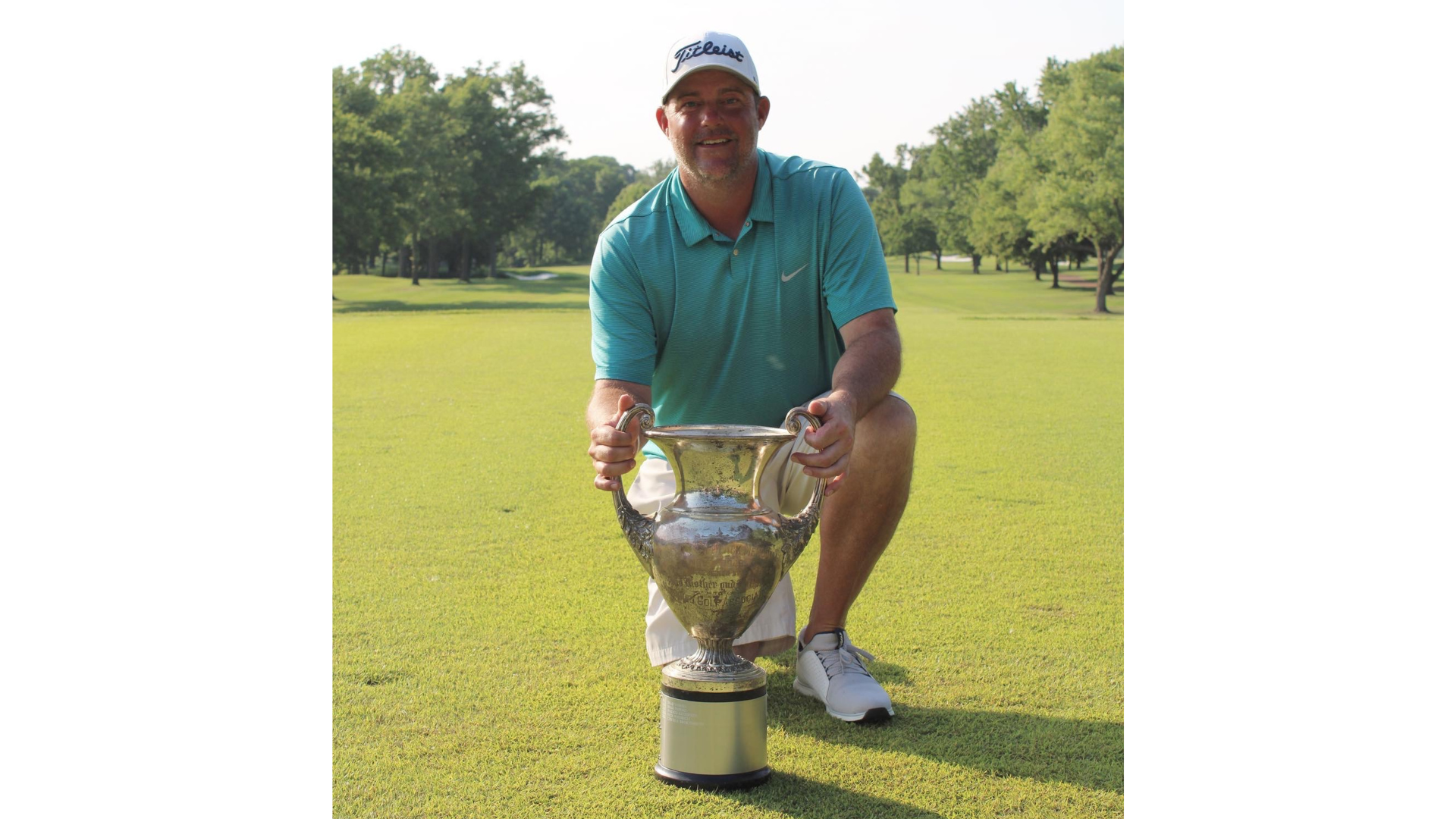 Niezing went 35 holes with opponent Sam Migdal, and held the lead for the majority of the match.

He started the 36-hole match at a steady pace, only falling 1 down to Migdal on hole 8. He capitalized on a bogey by Migdal on 9 to square it away at the first turn. He took control on the back 9, and finished the first round of 18 at 3 up over Migdal. Niezing never lost his lead, even with three bogies on the second back nine. Migdal closed in on Niezing on hole 16 and went into 17, 1 up.

In a storybook finish, Niezing sinks one in from 90 yards out on hole 17 to win the match and the Missouri Amateur Championship.

In the semifinal, Niezing was 2 up at the turn. His opponent, Alex Locke, squared it away on the 13th hole with a par putt. Niezing responded with a birdie putt on 17 to gain the lead once again and win the match 1 up.

The MGA would like to thank Bellerive Country Club and their staff for graciously hosting the event.

Our next men’s event is the Stroke Play Championship at Dalhousie Golf Club in Cape Girardeau on July 25.

For final results from the Missouri Amateur Championship visit: https://www.golfgenius.com/pages/3368198

Down to the final two at the Missouri Amateur Championship

Sam Migdal (St. Louis) and Chad Niezing (Manchester) both battled through a full 18 holes. Niezing won 1 up over Alex Locke and Migdal won 2 up over Dawson Meek.

Niezing led through the front nine holes at 2 up over Alex Locke. He held the lead until the 13th hole when Locke capitalized on a mistake to take the match to all square. Niezing sunk a birdie putt on 17 to gain the lead with one hole left. On the final hole of the day, Niezing and Locke both made a par putt, which left Niezing up 1 to advance to the championship match.

On the other side of the bracket, Migdal made that turn down 2 holes to Meek, who held the lead until the 15th hole when Midgal  shot par and Meek double bogeyed. Migdal grabbed the lead on hole 16. On the final hole of the day, Migdal sank a putt for birdie to extend his lead to 2 up and secure the trip to the championship match.

This is Niezing’s second year in a row advancing to the championship match. Migdal won the championship in 2016 and was the runner-up in 2017. The match will begin at 9 a.m. with a 36-hole match format.

16 players move onto the quarterfinals at the Missouri Amateur Championship

ST. LOUIS — Day four of the 115th Missouri Amateur Championship began this morning with a round of 32 golfers going head-to head in match play. Stroke play medalists Brad Nurski took down his opponent 8 & 6 to advance to the round of 16.

The 16 golfers that won their matches this morning moved onto the round of 16. Tee times began at 1:30 p.m. for the eight matches.

Ian McCrary and Brad Carpenter were tied through 18 holes. Ian McCrary ended up on top after 22 holes. No. 50 Hank Lierz upset No. 2 Presten Richardson 1 up to move onto the quarterfinals.

For final results from day four and match pairings for tomorrow, visit: https://www.golfgenius.com/pages/3368198

After shooting the low score for stroke play during rounds one and two, No. 1 seed Brad Nurski closed his round with a victory. He beat his opponent 2 & 1 to continue his run for another Missouri Amateur Championship title.

There were four matches that were forced to 19 holes to determine the winner. Ian McCrany (Overland Park, Kan.) upset Max Kreikemeier (Chesterfield) on the 19th hole. Tyran Titus (Springfield) beat out Gage Brauns (Columbia) on the 19th hole after he won with a par. Three-time Amateur Champion Skip Berkmeyer (Town and Country) was defeated by Tony Gumper (Saint Charles) with a birdie on the 19th hole. After a 23 hole round, Adam Pfeiffer (Quincy) came out on top over Warren Crow (Kansas City).

Thursday’s round of 32 will begin at 8 a.m. The match winners will then compete in a round of 16 to try and advance onto the quarterfinals taking place Friday morning.

For final results from day three and match pairings for tomorrow, visit: https://www.golfgenius.com/pages/3368198