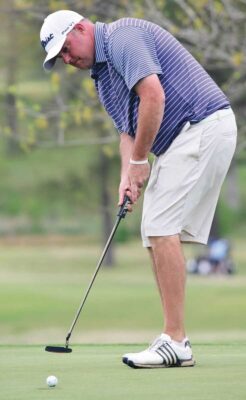 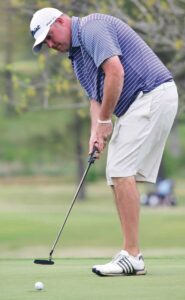 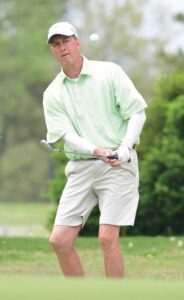 You can see the field of players and results here. RESULTS

POPLAR BLUFF, Mo. — The score Chad Niezing posted Sunday during the final round of the 76th Tom Hoover Ozark Invitational might suggest he didn’t have much trouble Sunday.

“I wouldn’t say I was having fun out there,” Niezing said after a 3-under-par 68 at a windy Westwood Hills Country Club.

“It was hard. It was really hard.”

Niezing made it look easy, winning by five shots as the only player to finish under par with a two-day total of 5-under 137.

Niezing became the 14th player to win the Ozark title a second time following his 2020 victory when he shot 136 to win by four strokes.

He led by as much as seven shots on the back 9 but said he had no idea where he stood on the leaderboard at any time Sunday.

“I had a very good feeling I was leading,” said Niezing, who is from Manchester, Missouri.

Niezing, Rose and Strickland started the day tied for the lead after 2-under 69 rounds Saturday.

With the usually threat of rain in the forecast for Sunday, tee times were moved up a half hour but the rain never came. The wind, however, never let up over both days.

Norton, the defending club champion, said the course played “about as tough as it gets.”

“I was really surprised when I came off 18 and they’re like he’s 3-under for the day,” Norton said of Niezing.

Only six players had even-par rounds Sunday including Poplar Bluff’s Ben Brumitt and 2016 champion Joshua Rhodes who both tied for sixth at 3-over 145.

“I’ve played this tournament many times and I knew how hard it was playing,” Niezing said.

Niezing’s five-shot win was the largest margin of victory since 1994 when Antonio Serrano shot 135 and also won by five.

Niezing’s round Saturday featured five birdies, 10 pars and three bogeys, all on par-4 holes. After a bogey-birdie start, Niezing got to 2-under before a bogey on No. 5. He made the turn even-par before a birdie on the par-3 12th and another on the par-5 14th. He ended the round with a bogey-birdie finish.

Just like in 2020, Niezing was in the final group tied for the lead with multiple players.

Unlike 2020, which was played in September when COVID-19 postponed the tournament, the final group didn’t also feature the defending champion.

Stepter started the day one shot off the lead but never got closer after a strong finish to the front 9 by Niezing.

“Chad did exactly what he needed to do,” Stepter said. “He got it around without making any mistakes.”

Even when he did, Niezing was able to limit the damage.

Niezing, however, chipped to within inches of the hole to save par and take the outright lead.

“Made a really good par, which kind of felt like a birdie honestly,” Niezing said. “You make par like that after taking a penalty it’s a boost.”

After a bogey on the par-4 fifth, Niezing led by a stroke over the rest of his group and Norton playing in the group ahead who carded his first birdie on No. 6.

Niezing also got his first birdie there to get back to 2-under then had another on the par-4 seventh. A par on the long par-3 eighth felt like a birdie when Niezing said he sank a 5-foot slider. Meanwhile, Rose and Strickland missed their par putts and trailed by two and three strokes, respectively.

Niezing’s biggest putt of the day, and perhaps the weekend, came on the next green.

With the hole location on the front left, Niezing’s second shot on the par-5 ninth landed on the back fringe. After seeing Stepter’s nearby chip, Niezing rolled in a downhill putt from about 40 feet for eagle.

“You don’t expect those,” Niezing said.

Rose, Stepter and Strickland made their birdie putts but Niezing was headed to the back 9 with a four-shot lead.

Rose and Strickland had consecutive bogeys while Stepter kept pace with Niezing with pars on what were the two toughest holes for the field Sunday.

On the par-3 12th, Stepter’s tee shot found sand protecting the hole location and he was unable to get up and down to save par.

“I played really, really well both days,” Stepter said. “I hit it good enough to go as low as I possibly wanted to, just made nothing, absolutely made nothing. And wasn’t even putting bad.

Niezing’s 20-foot birdie putt on 12 did fall as he reached 6-under for the tournament.

The margin grew to seven on the par-5 14th even after Niezing missed a 15-foot birdie putt and settled for par.

On 15, Niezing’s second shot came up short of the green and a chip left a long putt for par.

“I thought I made it, I was walking it in,” Niezing said of the miss for his second bogey of the day.

“If you hit a good putt it’s OK when you miss. I don’t mind missing putts if I feel like I hit a good put because that’s all you can do.”

After a two-putt for par on the par-3 16th, Niezing sank an 8-footer for par after running a putt past the hole.

Niezing had a birdie putt on 18 stop on the lip before a tap in to complete his victory.

Said Niezing, “Just make par, that’s all I had to do.”

The tournament is presented by Michelob Ultra.