DAWSON MEEK OF SPRINGFIELD AND TARYN OVERSTREET OF JACKSON 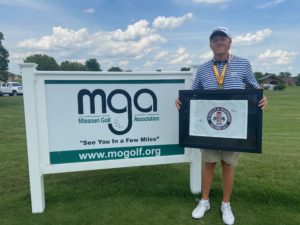 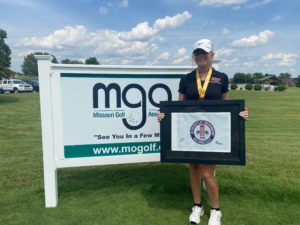 Our tournament at Silo Ridge Golf and Country Club has come to end. We saw 112 amazing golfers compete their hearts out for a chance to be crowned the junior match play champion. After another long day of 36-hole match play, our field of four boys and four girls has been cut down to only one per division. Our winner for the boy’s division is Dawson Meek, from Ozark, MO and for the girls, Taryn Overstreet from Jackson, MO.

Meek won both of his matches by battling back from three down. He utilized his incredible iron play and outstanding putting game, to chip away at Kendrick and Rischer’s commanding leads. Dawson was also able to achieve a feet most people dream of… he had a hole in one on the par three, fifth. This sparked a turnaround for Meek in the championship round.

Taryn Overstreet won both of her matches with incredible scores, Winning the first match six and five, and the second match four and three. What was unique about the girl’s championship round was Taryn played her younger sister Ella for the title. Taryn took a strong lead in both matches by shooting even par on the front side.

Silo Ridge Golf & Country Club has played host to 112 of Missouri’s finest junior golfers these past three days. The 2020 Missouri Junior Match Play Championship held 36 holes of qualifying on Monday and Tuesday whittling the field down to the top 16 boys, and top 16 girls advancing to the match play portion. After a long day of 36-hole match play the pack has been cut down to 4 boys and 4 girls. Missouri’s junior golfers impressed once again with their scoring and competitiveness.

After the round of sixteen, we saw many standouts out performances from the players. Starting with Jack Guyot (Chesterfield, MO), who completed an incredible comeback from being three down. Jack ended up winning one up after their nineteenth hole. Another standout performance was Audrey Rischer’s (Columbia, MO) victory of eight and seven. Audrey shot an incredible four under par on the front side, which allowed her to take a commanding lead right out of the gate. Other winners include Dawson Meek (2&1), Kanon Kendrick (4&2), Kiser Pannier (2up), and Emree Cameron (4&3).

We finished this incredible day with the quarterfinal matches. All eight of these matches produced some exhilarating stories and remarkable scores. One of the remarkable scores we saw came from Dawson Meek, who fired off five birdies in six holes, allowing him to win his match three and two. Another great scoring effort came from Ella Overstreet who shot one over on the front side, which allowed her to get a hold of the lead and win the match five and three. Other notable winners are Christian Rischer (4&2), Presten Richardson (4&3), Emree Cameron (1up), and Taryn Overstreet (1up).

Day 4 will begin with tee times at 7:30 a.m. with an exciting day of match play ahead. Live scoring can be tracked at mogolf.org in the scorings/pairings tab under the Junior Match Play Championship tab.

Silo Ridge Golf & Country Club plays host to 112 of Missouri’s finest junior golfers June 15-18. The 2020 Missouri Junior Match Play Championship holds 36 holes of qualifying on Monday and Tuesday with the top 16 boys and top 16 girls advancing to match play on Wednesday. The pack will be cut down to 8 boys and 8 girls on Thursday. Junior golfers impressed on Tuesday with 4 scores of even par or better.

After qualifying round 2, Jack Guyot, from Chesterfield, MO leads with a score of 2 under par. With first and second rounds of 71, Guyot was able to stay sub par both qualifying rounds and control his game to a tee. Closely following Guyot is Presten Richardson from Miller, MO being 1 under par and Christian Rischer from Columbia, MO being at an even par.

On the girl’s side, Drew Nienhaus (St. Albans) continued her stellar play to shoot a 1 under 71. After qualifying round 2, Nienhaus leads the field, shooting a 75,71 for a 146. Just behind Nienhaus, is Abby Howard (Kansas City) with a 76 in round 1 and 71 in round 2 putting her at 3 over par. Taryn Overstreet follows Howard with a score of 4 over par shooting a 72 and 76.

Day 3 will begin with tee times at 7:30 a.m. with an exciting day of match play ahead. Live scoring can be tracked at mogolf.org in the scorings/pairings tab under the Junior Match Play Championship tab.