Miss Landreth is well known to most of our MWGA members as having served this association well for many years.  Mary Jane was a recipient of the Bernice Edlund Award in 1978 for her dedication to the game and her sportsmanship.  She served as MWGA President during 1997-1998 and was honored with the Harriet Duncan Award which bestows Honorary Life Membership in MWGA.

This is an excerpt from the Obituary:

Mary never had any children of her own, but was a matriarchal figure to her family and was loving and caring to her nieces/nephews, great nieces/nephews and great-grand nieces/nephews. She valued education and helped many members of her family attend college. She was a shrewd businesswoman who gave solid financial advice. She shared her love of traveling with her family, taking her great nieces to Alaska and her great nephews to the Bahamas. For the last several decades she has wintered in Stuart, Florida. Mary possessed a profound love of golf. She was a member and former board member of Twin Hills Country Club, former board member of Freeman Hospital where she hosted the annual nursing conference and was an active member of the Missouri Southern Nursing Scholarship Program.

She was preceded in death by her parents and two brothers, Ed and George Landreth. Mary is survived by one brother, Harry Landreth of the state of Kentucky; as well as a host of nieces, nephews, great nieces and nephews and great-grand nieces and nephews. Graveside services are 2:00 p.m. Thursday, February 27, 2014 at Mount Hope Cemetery in Webb City, Missouri with Chaplain Danny Mullins officiating and additional remarks by Gerald “Dink” Sommer. Those honoring her life by serving as pallbearers are Jimmy Snyder, Steve Thomas, Fred Landreth, Freddie Landreth, Dink Sommer and Justin Tubb. The family will receive friends on Wednesday evening from 6-7:00 p.m. in the chapel of Thornhill-Dillon Mortuary in Joplin, Missouri. On-line condolences may be sent to the family through our website www.thornhilldillon.com. In lieu of flowers memorials are being directed to the Freeman Foundation and contributions may be left at the mortuary. Arrangements are under the personal care and direction of the Thornhill-Dillon Mortuary in Joplin, Missouri.” 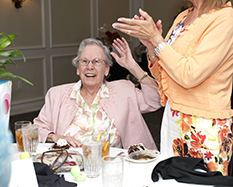 Known as “The Queen” by her friends and colleagues, Mary Jane was a great character among us during her time with the Missouri Women’s Golf Association.  Her great love of education and dedication to making opportunities for women was her hallmark.  Never having married, she provided scholarships within her own family for neices and nephews. Perhaps her greatest contribution to women’s golf was her oversight of of the incorporation of Missouri Women’s Golf Education Association, Inc. Her genius in financial investments and stock market analysis gave MWGEA a strong foundation for the future.  Along with her friend, Jane Kelly,  they personally funded the incorporation of the scholarship program.. no slight task!  Due to their generosity and leadership, they made certain that the scholarship program would be forever a non profit organization and would remain solvent for future generations of young ladies needing educational assistance. Today, one of the scholarships given each year to a deserving candidate bears her name as the “Mary Jane Landreth Scholarship”.
MWGA Fore State Director, Stephany Powell relates this information about Miss Landreth; ” We always knew her as “Queen Mary”… When attending the Fore State Championships, she always wore a crown!  Back in 1993,  I remember sitting in the basement with Mary Jane, Donna Howard, Tracy Thomas, Regina Townes and Jayne Watson planning the concept of a competition between four states with teams of our best players each year… Mary Jane was the person who contacted Oklahoma, Arkansas and Kansas and it eventually became a great championship with it’s first tournament being held in 1995.”  Stephany goes on to say, ” Mary Jane was another of our state’s “rules gurus”… she rode the cart at tournaments and always wore a big hat with a feather in it…  You knew you were in for it when you saw that feather! She tried to keep you out of trouble, but she always helped you play by the rules.”Mary Jane has been described as “rough and ready”.. You never knew what might happen when she entered the room.  Pat Will, Past President and Honorary Life Member recalls an MWGA Membership meeting where Mary Jane stood up and sang to the crowd a humorous ditty which definitely lightened the mood of the room.  She was generous and considerate to everyone.  “She was a true-blue friend to you and a great cheerleader for any golfer.” said Mrs. Will.

Another great friend of Miss Landreth was the great Joan Thomas of Joplin.  They were lifelong friends, more like sisters throughout their lives.  They hunted and fished together and of course, played golf.  When the MWGA began the Senior Championship, Mary Jane personally donated the Champions trophy that is known today as the the Landreth – Thomas Award.

The members of the Missouri Women’s Golf Association will miss this dynamic and inspirational woman.  We have truly lost a great champion of women’s golf.  If you would like to post a tribute to Miss Mary Jane Landreth, please email communications@mowmensga.org and we will add your comments to this Memoriam page.

Jim Hentry of the Joplin Globe wrote:  “Few people knew the golf rulebook better than Mary Jane Landreth.  “She was a rules person extraordinaire,” said Steve Thomas.  “I remember going to the state amateur, and she was in charge of the rules,” said Tammy Thomas, Steve’s wife. “She was on the state board for many, many years and in charge of the rules.  “She was always invited to Jimmy and Joan’s (Thomas, Steve’s parents) for dinner with the family, and we would have a discussion over some rule. Whatever Mary Jane said was the gospel. She was very saavy with that.”  Landreth, a life-long Joplin resident and active member in local, state and regional golf for numerous years, died Sunday at her home. She was 88. “She was devoted to golf,” said Virginia “Gingy’’ Laas. “She had great fun playing it and organizing tournaments and being being involved in the golfing world. She was always so positive about golf, encouraging others to get involved at the state level.”

From Nancy Sebastian, President, MWGA: Heaven has gained another angel.  Mary Jane was an inspiration for her devotion in valuing education and providing a foundation for our wonderful MWGEA scholarship program which continues to thrive.  She would be so proud of scholarship recipients and the many that return giving back to the association.  Rest in peace.

From Jayne Watson, Past President, MWGA: Certainly Mary Jane can be best described as “cantankerous” …. She was a character that I can best describe who had a heart of gold and her own style of lovable charm.  I have known her since the mid 70s.  We could boil to a rage over the USGA Rules of Golf, hug and laugh at each other the next minute.  We shared a love of the WMGA to the MWGA that made us laugh at our disagreements.  I will miss Mary Jane and her devotion to all of us.

From Mrs. Sonnie Dooley:  I’ve known Mary Jane since the early 1970’s and played many, many rounds of golf with her, as well as many card games.  Many fun / funny times together. With MJ one could always expect the unexpected.  A very intelligent lady and a treasured friend that will be truly missed.