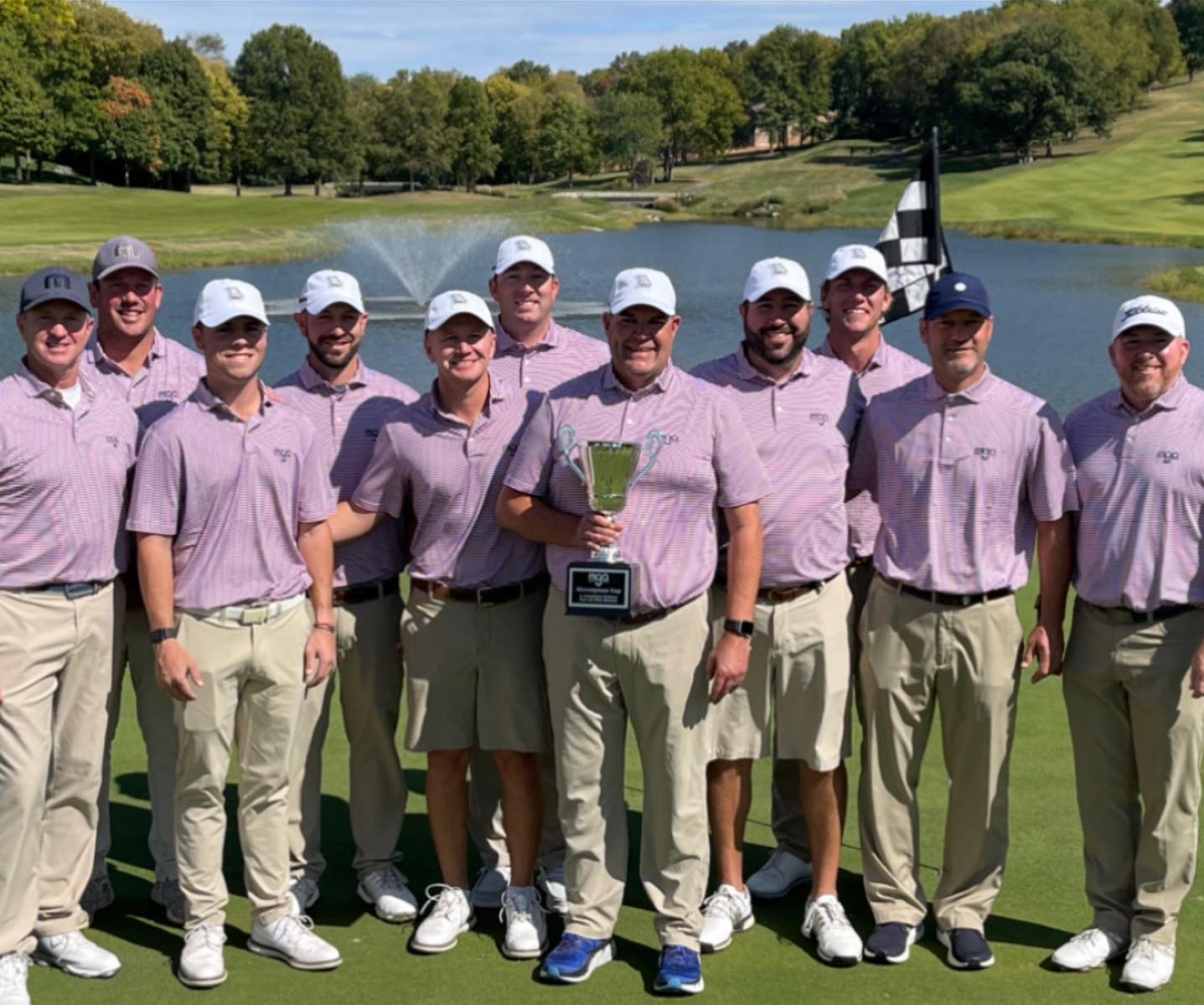 The Men’s West Team saw a dominant victory over the East Team, earning 16 total points to the East’s 4. In the Senior division, the East Team won the tournament at 11.5 points, with the West earning 8.5.

Today’s play consisted of single matches starting at 8:15 a.m. The Men’s West Team came into the round leading the East 7.5 to 2.5, and they held their lead throughout the single matches. Out of 10 matches, the West won eight and tied one.

Curtis Brokenbrow earned the East’s only win against Elliot Soyez with a score of 2 up.

These single matches brought the final score tally to 16 – 4, with the West on top!

In the Senior Division, the single match wins were split more evenly between the two teams. Going into the single matches, the teams were tied with 5 points each. After the round was done, the East had six wins, the West had three, and there was one tie.

The East Team’s Paul Neeman and West’s Kevin Rome tied in their match, earning half a point for each team.

After the round was all said and done, the East Team had won 6.5 points and the West Team had earned 3.5. This brought the final Senior score to 11.5 to 8.5, with the East on top!

Congratulations to the two winning teams, and to every player for qualifying for this year’s Hieronymus Cup!

SPRINGFIELD, Mo. – The first round of the annual Hieronymus Cup was held at Highland Springs Country Club in Springfield, Mo. today, Oct. 8, 2022. A total of 40 golfers qualified for this tournament based on points earned at events throughout the season.

To read more about the competitors in this year’s Hieronymus Cup, click here: www.mogolf.org/2022/10/meet-the-players-in-this-years-hieronymus-cup/

The morning kicked off with four ball matches starting at 8:15 a.m, and was followed in the afternoon with foursome matches.

After the first day, in the men’s division, the West Team has established quite a lead with 7.5 total points; the East Team earned 2.5 points on the first day.

The West Team won four out of the five four ball matches.

Going into the alternate shot round, the West was leading 4 points to 1.

Out of the five alternate shot matches, the West Team won three and tied one.

Soyez and Franks defeated Migdal and Niezing 2 up, Nurski and Parrish beat Kovach and Martin 2 & 1, and the team of Bowman and Locke won against Brokenbrow and Carpenter 6 & 4. These three West wins earned them three points.

The East Team saw one point in the alternate shot round from Choate and Sullivan, who defeated Clark and Stalker 2 & 1. Both teams also earned half a point from a tie between Eckelkamp & Gumper and Gafner & White.

After both rounds of play, the West Team is leading with 7.5 points to the East Team’s 2.5.

In the Senior division, competition is much tighter, with both teams earning 5 total points!

The East Team dominated the four ball round, winning three out of five matches and tying one.

The West Team had one win from Harry Roberts and Kevin Rome, who beat the East Team’s Buddy Allen and Brad Thielemier 6 & 5. And both teams earned half a point from a tie between East Team members Brian Hall & Paul Neeman and West Team members Ed Brown & Steve Groom.

The West Team was able to even the score in the alternate shot round, winning three rounds and tying one.

Brett Allen and Eiserman won a close match against Buddy Allen and Thielemier 2 up. Roberts and Rome defeated Nolfo and Rudd with a score of 3 & 2, and Fredrick and McQueary beat Hall and Neeman 3 & 2.

Lovett and Pfeil earned the East Team’s single win against Brown and Groom with a score of 2 & 1.

Finally, there was a tie between the Viehls and the Haskells, earning both teams half a point.

After the East taking the four ball round and the West seeing success in the alternate shot, we are heading into day two tied at 5 points a piece.

Play will continue tomorrow, Oct. 9, with single matches starting at 8:15 a.m. After all play has finished, awards will be given to the winning teams.