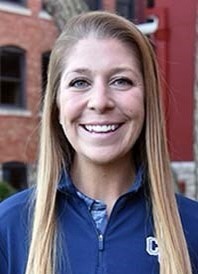 Michelle Parrish Back for Second Summer as Junior Golf Director

April 19, 2022 – The Missouri Golf Association is so excited to welcome Michelle Parrish back for the 2022 season as our Junior Golf Director! This will be Parrish’s second summer in this position where she will continue her role as the leader of MGA’s Junior Golf program.

A little over a month ago, Parrish was named the head coach for both the men’s and women’s golf programs at Columbia College. She had served as the interim head coach since July 2021 and has served on the team since 2017. To learn more about Parrish’s career at Columbia College, see our previous coverage on her promotion: https://www.mogolf.org/2022/03/parrish-to-lead-columbia-college-cougars/

Before coaching for the Cougars, Parrish was a standout golfer at the University of Missouri from 2011-2016, where she ended her career with a season stroke average of 72.50, the lowest average in program history. She also received SEC Second Team All-Conference honors. In her senior year, she recorded a runner-up finish at The Johnie Imes tournament, where she fired the second lowest 54-hole total in program history at 9 under par. During her time at Mizzou, she was awarded the N4A Wilma Rudolph Student Athlete Achievement Award and was a finalist for the 2016 NCAA Woman of the Year Award.

When she’s not busy directing the Junior Golf program or coaching her teams to success, Parrish finds time to compete in high level amateur tournaments. In the summer of 2019, Parrish won the Missouri Women’s Amateur Championship and the Missouri Women’s Mid-Amateur Championship. She was later named the 2019 Missouri Golf Association Player of the Year, and was named to the Global Golf Post First Team Women’s Mid-Amateur in 2018 and 2019. In 2020, Parrish earned the WIN for Columbia Gladys Stankowski Sportswoman of the Year honor.

We are thrilled to welcome Parrish back for another summer, and we know the Junior Golf program is in good hands! Keep an eye out for Parrish this summer and welcome her back for her second year!